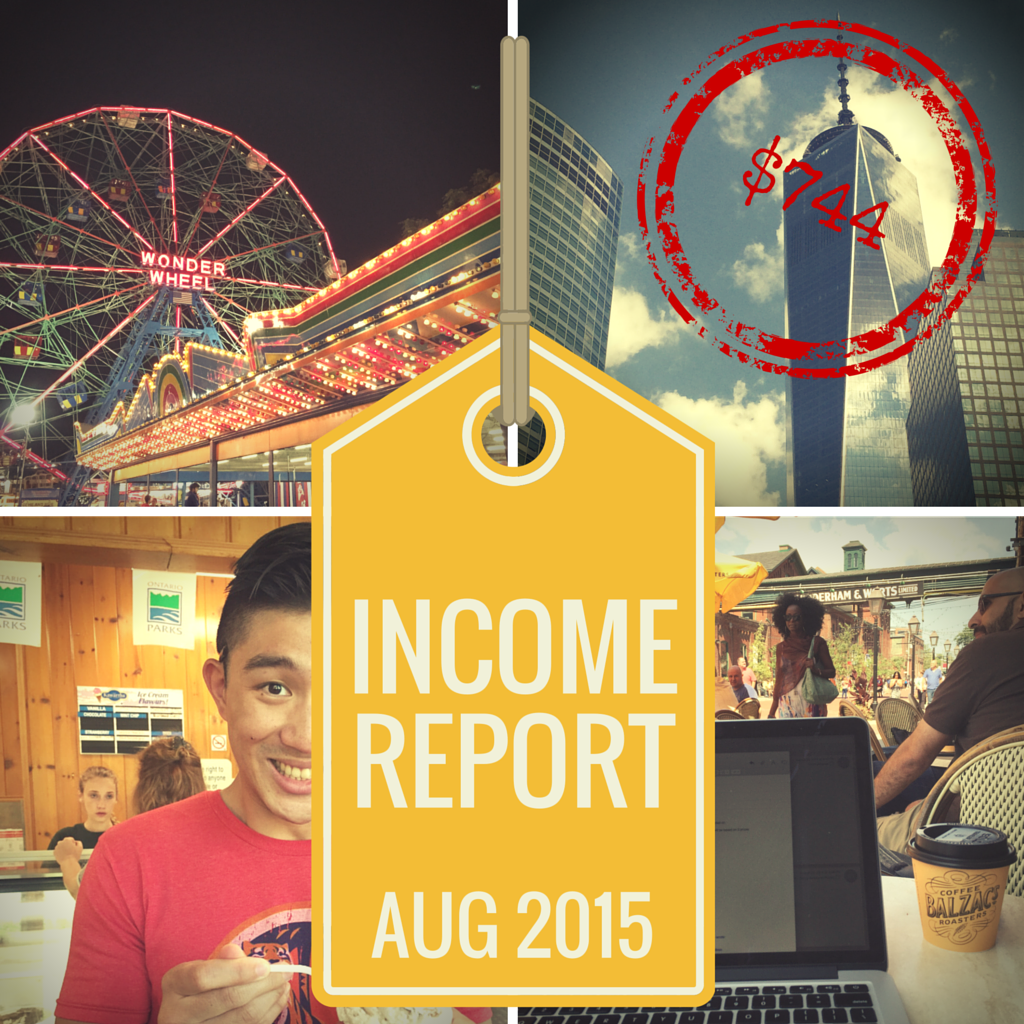 The month of August was another good month.  While I haven’t been able to crack the $1000 mark, I’ve been happy with the consistency considering I’ve been basically blogging on a part-time basis.  I think a lot of this has just come down to setting the right things in place and letting it run.  With it being the summer, I was more than happy with this.

Here’s a breakdown of how the blogs did in the month of August.

There was a slight increase in August but nothing to put me over the top.  Affiliate income continues to be a blaring hole in the line up.  My new goal is to hopefully bring the affiliates up to $100/month consistently by the end of the year.  I know people that do a lot more but that’s a good place to start.

The Blogger Network (TBN) has quickly stabilized to become the leading advertising network.  What I love most about these guys is that they’re constantly innovating.  They never just settle for the status quo.  Coming up is another tweak in the way mobile ads are delivered so I’m hoping for a boost there in September.

Looking at the numbers here, I got a boost all around except for impressions but managed to increase earnings by >$10. AdSense took a big dip in August for whatever reason despite increase in page views, impressions and clicks.  The RPM just wasn’t there with the advertisers.  Other than that, I don’t have a great explanation.

Once you look at this graph, you realize where I underperformed was in the above article ads.  In previous months, this block out performed everything else.  Not so much this month.  50 clicks last month is down to 24. Typically text ads are displayed significantly more than any others but I think because of the poor click performance on the above article ads, Google probably tried to compensate by displaying more rich media ads. This month, the income closely mimics the type of traffic I’m used to seeing coming to my site(s).  A great learning from this chart is to know which regions you have the most influence in and which ones are most likely to click on things. I cut Sovrn August 14.  Things dropped to 0 right after.  Can’t say I’ll miss this one. I’m surprised that I’m seeing anything at all for Spoutable as I had them off for all of August as a test.  Can’t quite explain where the $1.45 trickle came in.

Conclusion about Ad Networks
There was a slight drop off in advertising income after shutting two sources off.  Some of it came from poor performance with Google but TBN was able to make up for parts of it.  Heading into holiday season, I’m expecting these numbers to bounce back!

Not a whole lot happening for me from the affiliate front.  This is still one of my big goals for 2015.  I built the deals page as part of this but it hasn’t been getting a whole lot of traction.  Once I get a chance to do my site rebuild, I’m hoping to put a greater emphasis into this.

Despite not being the greatest pay, I am enjoying that I can make a steady stream of income from guys like CopyPress.  The only tough part about it is that it does disrupt your writing flow a bit because you’ll typically get assignments out of the blue and you’ll have a week to complete it.  As a result, I’ll have to drop everything to focus on the paid work.

Sponsored work always seems to come from the most unexpected place.  While a lot of people have written off IZEA, I continuously check and make sure my profile is updated.  Back in late June, I had an opportunity to do a sponsored piece and it just got paid out.  This just goes to show you that the focus has to be about building up your blog, keeping your eye out for opportunities, and getting your name out on platforms like IZEA to give you the best chance to win.

The sponsored Twitter chat hosting came about from positive network building and making sure you keep top of mind with other influences in the space.  An opportunity came up where they needed people and they thought of Going Awesome Places.  That’s how a lot of this ends up working out.

Here’s a look at my traffic numbers from June.

August saw an amazing lift to traffic compared to the rest of the year.  As I’ve been saying for the past couple of months, my goal has been to rise above 1,000 sessions a day.  I’m happy to announce that I’ve finally made it! There was a slight drop in traffic for TBB in August.  This blog’s definitely been hard to grow over these few months.  I wish I could clone myself so I could growth hack it but to be honest it’s really through the support of fans like you and spreading the word out that keeps me going.  If you know of any other bloggers that are in need of a breakthrough, send them my way! In July, I turned off ReviveOldPost to see how that would affect my traffic.  In August, I turned it back on to see whether the lift on it is worth it.  Looking at the numbers, here’s what I see: This month’s keyword query was quite interesting.  Ignoring the (not set) part, I brought in 110,000 impressions just from Google searches with the most coming from “airbnb copenhagen”.  I never thought I’d see “things to do in shanghai” dethroned for once but it happened.

The key now is to continue to write posts like that, which will have a high chance of success to be ranked well on Google.

I recorded a slew of podcasts in August but I need MORE!  If you have a great story or want to share some of the things you’ve learned in your blogging journey, I want to hear from you.

I also have a HUGE favor to ask of you guys.  If you haven’t yet, could you head over to iTunes and leave a review on the Travel Blog Breakthrough podcast?  Still don’t quite have enough for reviews to show up but I am oh so close! For a limited time, I’m offering the course for only $10 to all of you super fans.  Use code TBBINCOME AUG.  There are only 3 codes and it expires November 1, 2015.

October came in a hurry and as the temperatures drop, I’m thinking of warmer days.  With that though, now is the perfect time to get back into creating all the content pieces I’ve been wanting to do for Travel Blog Breakthrough.

Will's Wisdom
Be patient with your traffic.  It takes a lot of nurturing to grow but if you keep writing quality blog posts that people search for, you’re bound to hit success.
Share3
Tweet
Pin
3 Shares
Like what you've read?
Get exclusive monthly content on blogging tips & tricks and get a FREE COPY of my Top 10 Travel Blogging Tools.