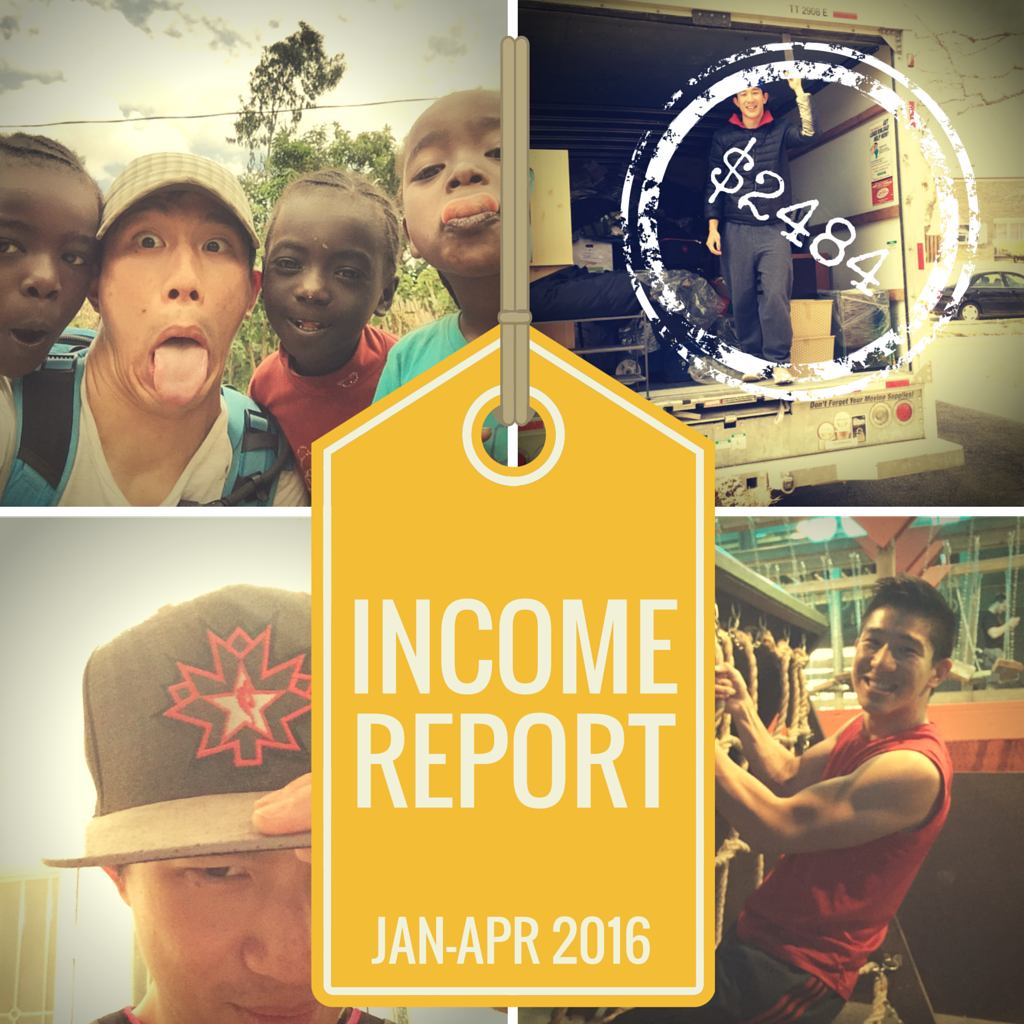 You let things slide a little and it’s May already!  I know many of you look forward to these every month and I have to apologize for not being able to keep up but as bloggers you all know that it is hard to keep up with just one blog let alone two.  Not to worry though, there’s still a lot I want to do for you guys with Travel Blog Breakthrough and if you keep reading you’ll see what I’ve been up to.  Without further ado, let’s look at the first four months of 2016.

Travel Blog Breakthrough really started because one day I had the crazy idea to take all the things I had learned about travel blogging up to that point and share it in the form of blog posts.  This turned into the Travel Blogger’s Toolkit series on Going Awesome Places.

Realizing that this was becoming bigger than what made sense for a regular travel blog, I took the leap of faith and decided to start another blog – this one you’re reading.  I wanted to do more than just toolkit blog posts though and that’s how the podcast started, and these income/traffic reports started.

I may be a bit naive here but one of the frustrating parts about travel blogging is that other bloggers tend to be so guarded with their information, instead of sharing and helping.  My philosophy has always been that we’re all in this together.  The better we can all become as bloggers, the stronger our voice becomes which then increases the amount of opportunities that come for us as a community.  Community is the operative word here.

The first report was all the way back to October 2014 and here’s a quote that I think will resonate with a lot of you.

Above all else, patience has really been the key.  You have to understand that things don’t just happen overnight.  As you’ll see below, it’s taken quite the long time to get my blog up to where it is today.  I know it still has a long way to go to stand shoulder to shoulder with the other titans of travel blogging but it’s all part of the journey.

I think the biggest thing that keeps these income and traffic reports going is the fact that the path to success is really a journey.  I for one am not one of the upper echelon bloggers.  In fact, I have to say that I still suck at A LOT of things.  The key at the end of the day is that these monthly reports are a perfect way to reflect on how to learn, iterate and continuing to do what you love.

As much as these are good ways for me to keep track of my own progress, I honestly do it for you guys.

The first 4 months on auto-pilot was not as disastrous as I thought it’d be considering I wasn’t concentrating too much on the blog.  It’s a testament to building in passive income into the plan while also executing on a few key big opportunities.

Note that I’ve converted all numbers into USD just to make it easy.  Since this report is an aggregation of several months, I won’t be doing comparisons with the previous report.

If you look at the last income report, I was peaking at around 1,500 views a day.

Based on the average over 4 months, here’s how Going Awesome Places performed: As usual, the first part of the year saw some modest and steady growth.  That’s all I can ask for at this point as I know I haven’t been pushing out new content on a consistent basis.  Don’t worry guys, a new podcast episode is in the works! The stats below are only for Going Awesome Places.

Overall, I don’t see too much of a difference here compared to last year.  Pinterest growth has definitely slowed down.  From what I understand, there was a change to the algorithm in February which resulted in a massive dip in referral traffic.  I haven’t had a chance to do a deep dive on how to work with the new change but I’ll continue to monitor in the upcoming months.  Nice to see that Revive Old Post is still doing its thing so that’s been good to have running.  Beyond that, I see that Facebook has taken a bit of a dip. I always love analyzing the top queries that come into the blog and this year so far the make up is slightly different from last year which is fascinating.  Spots #7-#9 are all new ones I’ve never seen ranked this high.  These of course are posts I’ve had published for awhile but are just slowly starting to creep up in the rankings.

Another part that’s interesting to look at is the CTR or click through rate.  Without a doubt the “bali itinerary” search term does incredibly well with 17.66% while everything else settles in around 1-2%.  Take a look at what this looks like for your blog and it’ll give you a good hint about what makes a successful article.

In case you’re wondering why anything before February is 0, the reason is that Google only keeps data from the past 90 days. This is where I hit you guys with the deep stuff.

Life Outside of Blogging

So let’s see.  At $2848 across 4 months that breaks down to $621 a month.  Am I upset?  No not really and that’s because there’s just stuff that’s more important than blogging sometimes.  While it was certainly not my intention to step off the gas-pedal so to speak, these past 4 months have been a flurry of a lot of crazy both good and bad.

For one, there was the crazy epic trip to Africa where I got to know the tribes of Omo Valley of Ethiopia and then an unexpected cruise along the Nile in Egypt.  While there wasn’t a whole lot of trip preparation, it was a long trip and when I returned, took awhile to recover from.  From there, the good thing was that this wasn’t a press trip so I didn’t have specific obligations but I did put pressure on myself to try to get the videos produced and posted as quickly as humanly possible.  Those two videos are out now which is a huge monkey off my back but there’s SO much more to talk about so look out for those posts.

Some of you may know that I also have a full time job and so over the course of these 4 months, it went into insanity mode.  All-nighters was the norm and there was essentially no time to work on the blog at all.  Any extra time I had was reserved for sleep.

And lastly, there was a move to a new house in the middle of all of that.  For anyone that has their own place, you know how much goes into a move and the packing and unpacking that’s involved.

Soooooo busy was an understatement for this year so far.

I think what really blew my mind this year so far is just how good The Blogger Network (TBN) has been for me.  They rolled out several new products during this time period and somehow got CPMs to go up in a BIG way.

On top of regular ad units, they have an impressive array of augmented units that include video, sticky slide-out and images.  I’m continuing to test each one but so far those “high impact” ads that you see are driving in quite a bit of income.  It’s so good that I’m pretty much seeing a double-up on performance compared to last year. With TBN at $519 and Google at $219, you almost have to consider dropping Google entirely.  One of these months I should seriously consider that experiment and do a full switch over.  What do you think?

Investing in Yourself to Grow

It’s so easy to get stagnant in this industry that we’re in.  As bloggers, let’s face it, we’re also quite thrifty (okay at least I can admit that I am).  So when it comes to spending money on the blog, I’ve always been very weary of spending huge sums of money.  However, as you build your income engine, you have to loosen the wallet and spend money where it makes a difference.

For me, hosting and special tools was where I started.  When you’re the one doing almost everything, finding efficiencies and ways to automate are so important.  As you grow, you can’t continue doing the grind-out tasks and that’s why CoSchedule, Canva, and BoardBooster have been a godsend.

The big expense for me this year has been a a site redesign project that has been something I’ve been wanting to do sometime.  This time however, instead of me doing it myself, I’ve gotten a very talented guy in Dustin Stout over at dustn.tv and Warfare Plugins to help me out.  While it’s not a small chunk of change, I knew that this was something I had to invest in to truly help me grow.  More to come in the coming months!

In December’s income report, I mentioned the purchasing of an SSL certificate.  There were rumblings of Google looking favourably at websites that were HTTPS secure.  The idea was that I would switch to over and see a marked improvement.

So how did that go?  Well, the purchase of the certificate and setting things up with my host, WP Engine, was incredibly simple.  I thought I was all good to go but then I realized that none of my ads were showing up.  After doing some digging and then contacting The Blogger Network directly (because Google sucks and has no support at all) and they told me that most display ad networks don’t support HTTPS.

It was a bummer to hear that it was the case but luckily I didn’t have to spend too much for the certificate.  In the end, I disabled HTTPS on my site.

If you’ve found TBB hugely valuable over this past year and want to show your support, I’ve created a Patreon page where you’re able to show you love for as little as $1.

Of course, I wouldn’t expect you to do so without getting anything in return and so you’ll find several tier levels similar to Kickstarter where you can basically pick a package to get even MORE out of Travel Blog Breakthrough.  I’m committing to amp it up and for those that are truly committed to taking your travel blog to the next level, there are now ways for you to get access more of me.  Thing is, nobody’s contributed yet so I’m just waiting for you guys to tell me that this is important.