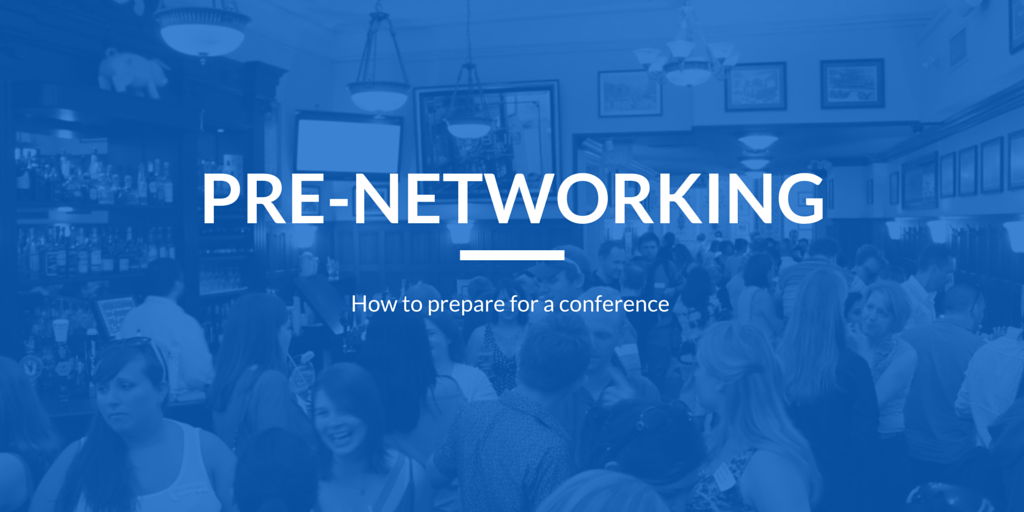 Pre-networking – How to prepare for a conference

Going to your first conference is a little nerve-wracking.  You’re not really sure what to expect.  You don’t know who you’re going to meet.  You don’t know what to bring.  And thoughts about “is there anything I should do beforehand” start revolving around your head.

Well I’m going through one of these moments right now.  With less than a week to go before Affiliate Summit West in Las Vegas, I’m trying to get ready for my very first conference.  Although it isn’t quite the traditional travel conference like TBEX, I think they’re still similar in a lot of ways.

Conferences are a crazy whirlwind Going to a conference is a crazy experience .  With only 3-4 days you’re talking about thousands of people you’ve never met, sessions, vendor booths, networking sessions and parties.  To say it’s a whirlwind is an understatement.  So to make the most of it (and you probably want to because you pay top dollar for these things), you’re going to want to do some preparation.

The funny thing you have to realize about conferences is that it’s less so about the sessions themselves than the networking you get to do.  It’s the one time of the year that everyone is gathered in the same spot at the same time that all care about the topic the conference is about.  Networking is your chance to learn from others first hand, trade industry secrets (sort of like what I’m doing on this blog), to create business opportunities and to make life-long friends.  You can only do so much of that online.  Meeting people in real life is where the magic happens.

But here’s the problem.  If you’re on your own or you’re a first timer at the conference, how do you best make use of the time to create those meaningful relationships?  Time is your worst enemy and what’s tricky is that getting to know someone takes time.

This is where pre-networking comes in.

The power of pre-networking before your conference

Pre-networking is actually pretty simple and is something I’m sure most of you are doing already.  It’s basically the act of reaching out to people you’d love to meet and hangout with that you know will be at the conference.  What you’ll find is that people are more than willing to respond back and start a conversation or set up a meeting with you.

I originally heard of the word through my interview with Chris Backe of One Weird Globe.

Theory behind it:  By introducing yourself beforehand and getting the conversation started, you can skip the “hello my name is” step and talk as if you’ve been long-time friends.

So how do you do this?  Here’s a step by step guide to pre-networking for a conference.

2 Find people to say hello to

This part is getting easier and easier because of social media and technology in general.  Here are a few ideas:

Just like how easy it is to pitch brands, it really just starts with one simple message.  Whether you do it on Twitter, Facebook or e-mail, a simple hello and introduction is all it takes.

As an example, I wanted to find out where all the travel bloggers were at at Affiliate Summit so I went through everything I mentioned in step 2.  I either sent out open blasts on the Facebook group to find out which travel bloggers was going or found individual folks on Twitter and tweeted them asking if they were going to the conference?  Each of those have led to further communication.

The last step is to coordinate some sort of meeting or to at least find out where they’ll be during the conference so that you can say “hi”.

For Affiliate Summit, I found out that there was a blogger meetup so with the few travel bloggers I talked to, we agreed to chat there.

Like I said, nothing particularly mind blowing here.  You were probably going to do all of this anyways right?  Hopefully I’ve been able to reinforce this concept and putting a name to pre-networking.

The key to all of this is to make yourself known and doing some legwork before the conference so that you’re not trying to figure your way around the different groups, cliques and individuals during the conference where you’re already strapped for time.  No time to waste right?

So go forth and happy conferencing!